Things You Can Eat… By the Bucket! 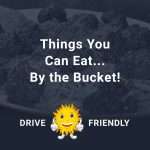 Drive Friendly with Steve & Felecia
Things You Can Eat... By the Bucket!

We were live, in the real world (bye bye Zoom… for now) with guest Ed White at his shiny new “By the Bucket” location (SEC of Cooper and Warner in Gilbert, AZ – http://www.bythebucket.com/gilbert.html). Steve has been waiting, dreaming, yearning for this day since he first heard the news. Join us!

Skip to…
0:00 – Drive Friendly Live from By the Bucket!
The day is finally here! Steve and Felecia are recording live from the restaurant that specializes in meatballs, spaghetti and sauce served – you guessed it – by the bucket.

0:57 – Even Worse than the Lions?
Even the Detroit Lions won this week, but the Jets couldn’t pull out a win. But the Jets’ loss was Felecia’s gain, as her fantasy team won with help from the Jets’ opponent, the Eagles. This upcoming weekend, put money on the Saints instead of the Jets.

4:00 – The Cost of Staying Cool in Your Car
Last year Freon cost $100-120 dollars a keg, last week it was up in the $200s, this week the average price of local stores was $375. Steve is keeping the price down as long as his current stash is in stock. Make sure to consider preventative maintenance to your car’s air conditioner to make sure it lasts the life of your vehicle – and do it now because it’s going to get more expensive.

6:40 – The Price of Towing
Need a tow? It’s going to cost you more! Check with your insurance company if it’s covered. Many people think they have towing and roadside insurance covered but are surprised to learn they actually don’t qualify. But an important thing to note – if you don’t have AAA, you can call them and sign up on the spot.

9:55 – More Extended Warranty Nightmares
Steve shares horror stories about a customer dealing with trying to use their extended warranty coverage. He had two customers with almost the same issue with their cars and the insurance experiences were totally different.

13:32 – A Walkthrough of By the Bucket with Ed White
The “Bambino” size is meant to feed one person, but it’s huge and is only $8! Feed a family of 5 for $15. Steve takes a turn building a bucket. Ed got his start in food working at his parents’ coffee shop, then later worked at a steakhouse. He was tired working for the man and wanted to be his own boss, leading to By the Bucket!

21:50 – Other By the Buckets!
There are 6 other By the Buckets throughout Arizona. It started as a franchise 3.5 years ago after the founder often cooked spaghetti and meatballs for his father. More locations to be determined down the road.

26:24 – How to Build a Business
Steve originally worked for someone else when he first moved to Arizona, but decided working for himself was the best way forward. When he opened his first shop in New York he got every customer through personal relationships, but in Arizona he had to truly build it and grow it from scratch.

30:58 – The Early Days of Friendly Auto Centers
The first things Steve had to do to start Friendly Auto was find a location and rip it up – it was a mess, missing a roof, toilets, etc. Steve’s belief is the fortune is in the follow up – if anyone has an interest in your business, follow up to them. Then network, network, network and keep showing up.

35:08 – The Secret… Listening
By listening closely to people’s conversations, you can pick up details about how they could help you. Maybe they own a business and can refer customers to you. Maybe you can learn that someone is struggling and that’s why they haven’t been to your business in a while.

37:36 – More iBuyer Fallout Post Zillow
Other iBuyers like OfferPad and OpenDoor are freaking out after seeing how Zillow’s program fell apart. Zillow has canceled all its contracts, even people whose houses were supposed to be sold. These other companies are trying to build relationships with realtors in the neighborhoods to make the programs more successful. 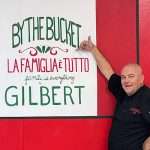 Find the Podcast on: Apple | Stitcher | Google | Spotify | Castbox. Listen live every Saturday at 10am (Arizona time) on Facebook Live or YouTube.
Menu